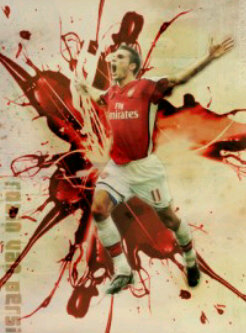 School examinations are coming thick and fast and as such I’ve been struggling to make out time to post.

I just finished a paper, so I have some time on my hands to whip up something.

Straight to the gist, and despite several speculations about his future, a new report from a top journalist Mirror indicates that our super captain is set to put pen to paper to extend his stay in North London.

The news was revealed by Paul Smith of The Sunday Mirror on a show on SkySports, one in which he stated assuredly that Robin will sign a new contract at Arsenal.

This is a welcome development, one that will surely lift the spirits in the camp. It will also give the fans hope and spare us of any unnecessary transfer stories come next summer.

Some people will be quick to point out that this story is unconfirmed and understandably so. If there’s anything we know, it is that a player hasn’t signed a contract with Arsenal until it shows up on the club’s official website.

I however think the fact that we’ve not heard anything about broken down talks suggests that the outcome will most likely be positive.

Still on transfer stories, Borussia Dortmund star Mario Goetze has been ruled out of action for a month with injury. The 19-year-old tore a muscle in his thigh over the weekend in a game against Kaiserslautern.

This all but rules out the possibility of a move to Arsenal, even though it could be argued that he is expected to return from injury a few days into the transfer window. *watch this space*

Marouane Chamakh’s agent has dismissed the possibility of him returning to Bordeaux.

With speculations rife about an impending departure from Arsenal, Moroccan has decided to wait till the end of the season before making a decision on his future.

Chamakh has rarely featured this season partly due to his poor form and chiefly due to RVP’s imperious form in front of goal.

His agent however stated categorically that Chamakh does not intend to return to France.

He has struggled since last winter and if his form does not improve considerably, I doubt he’ll be starting next season as an Arsenal player.

So Chelski’s win over Citeh completed what was an amazing 125th anniversary for us. It also blew the title race wide open.

We play City next and we can be fairly confident of getting a result; a win will reduce the gap between both teams to 6 points. How fast things change!

They will be without Clichy who got sent off, and apparently Yaya Toure has hit the yellow card limit, so he won’t feature. Great news if you ask me. Let us know what you think in the comments!

That’s all from me today, I just had to bring those stories to you our amazing readers. Apologies if it does not match up to the usual standard, exam stress is really getting to me.

Have a great day wherever this post meets, keep it safe and goonerish!

← BREAKING: Andre Santos Out For 3 Months!
Teary Henry Could Return As Fly Emirates Visits Etihad Stadium : The City Preview →
%d bloggers like this: