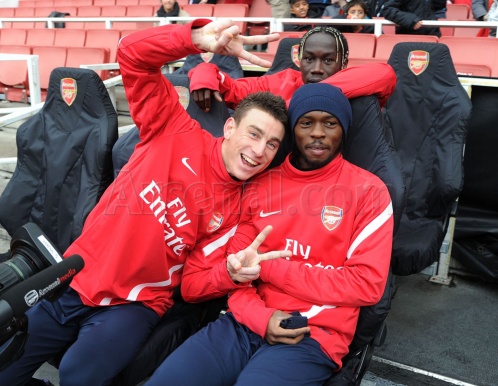 Morning guys! A boring couple of days on the Arsenal front if you ask me.

The feeling of “Henryism” seems to have died down a bit, the noise gone down a notch and everyone is back to their senses, realizing we still have needs.

Henry is only a stop-gap solution, we still need a goalscorer when Titi leaves. But more urgently we need a left back; 4 natural full backs out until God knows when, and Coquelin won’t be around for a a few weeks.

Rumours have been flying around concerning players we should and could have signed, but at least we know those we won’t be seeing in an Arsenal shirt, if Arsene’s words are anything to go by that is.

The boss has revealed we won’t be trying to sign Kalou in January. He also denied links to Ravel Morrison and Suarez the non-racist. In his words:

“Ravel Morrison at Man United? No. We know him well, No to Kalou and Suarez as well.”

How comforting Arsene…telling us exactly what we want to hear. Our squad has enough quality, Park and Chamakh will come good. I wonder how long we’ll have to put up with dross.

Some transfer news; Felix Bastians is the latest on a list of almost 300 left backs linked to us. The 23 year old who currently lines up for Germany side, Freiburg isn’t new in England.

He played at lower league clubs like Gillingham, MK Dons, and Notts County. He’s got £5m slapped over his head and Arsenal are thought to have shown interest.

He’s a typical Wenger signing, young, unknown, with a lot to prove. In a few days, we’ll see if this story ends up on the pile of rubbish stories before it. My bet is it will.

We travel to Swansea tomorrow, with no full backs, but with Thierry Henry. Swansea are a good side, they play lovely football and we were lucky to beat them at home.

Miquel and Djourou should be available, so we can play Kos and Mert in the centre. Arteta, Song and Ramsey in midfield; and Walcott, Arshavin, RVP upfront. Titi starts from the bench again and Arshavin should be given a chance to build on an encouraging performance.

We HAVE to win tomorrow though, anything short and we are in trouble. I know it’s still early days but we are 12 points behind City, but more painfully 9 behind Spurs.

Finishing over Spurs is not our birthright! We cannot keep believing they will drop points, like we won’t. We need to cut out our mistakes now, get the points so Tottenham’s losses can count for something.

That’s all from me today, I’m done ranting. We have a game to win tomorrow. No mistakes will be tolerated.

It’s a very cold morning in Lagos, a few hours before the first round of EPL games kick off. Here’s to hoping all our rivals drop points and we win our game.

Any thoughts or comments on new signings and Swansea? Please drop them below.

Keep it goonerish wherever you watch from!